Mary Jane Copps: The undeniable value of a phone call

Thanks to all who voted! We really appreciate it!

For a call tracking company not to be chatting with the expert in phone calls would be like Serena Williams refusing to enter Wimbledon. Unthinkable.

That’s why we’ve had the privilege of chatting with Mary Jane Copps, award-winning business owner and author of the hit book “The Phone Book”. With over 20 years of experience in the telecoms industry, Mary Jane sat down with us to discuss the true value of voice connections and what exactly she thinks the future of telephone calls is going to be.

In 2019, much conversation seems to be all about live chat, AI, and social media. What role do you think the telephone will play in this digital utopia?

The primary gift of a phone conversation is the tone of voice. When we communicate by text, email, or via a screen, it is not only easy to misinterpret tone but also to lose opportunities.

Would you agree that can happen in the workplace also? Mixed interpretations of text-based communication leading to confusion?

Absolutely. The reality is that it slows every process down. I recently had a client come back to me to say that his son, after having my training, just reported back to his father saying

“It’s absolutely amazing how much faster you can get things done by a phone call?”

When you can ask questions in real-time, you can expand the conversation. If you’re going back and forth via text then your conversation is extremely limited. In particular, for salespeople, our main job is to help our clients establish what their challenges are. Sometimes our clients haven’t said in words that there is a challenge they have. It’s not until we get them into the conversation, and ask them questions, that they realise something is actually a problem

So, a phone conversation is what highlights the fact there is an issue, not a barrage of emails and texts?

Correct. I have many examples of people sending me messages on LinkedIn, or email, and they’re asking me for a sale. They have no idea who I am or what my challenges are. The chances of making a sale based on guesswork are extremely limited.

You’ve explained the importance, and benefits, of a phone call. How do people develop their ability to make and receive calls?

A lot of young people grew up watching their parents use their phones to communicate with people. And of course, we learn by example. When I was younger, talking on the phone was a skill that we automatically learnt. We answered the family phone so we learnt phone etiquette very early on. Whereas everybody now has their own phone and they create their own sense of etiquette with it.

Talking on the phone has a lot to do with public speaking, except there is no body language. So you’re relying on your voice to do all of your communication, The rhythm of your reaction is also different. If I sent you a text, you have the chance to read it, assess it, think about it, and then respond. On the phone, you have to answer in real-time. There’s a flow to that conversation that people need to get used to.

As well as communications with customers, why is it important we develop these skills?

If we don’t give these communication skills to young people then we’re creating a bigger gap in their skill sets. I think people who have better phone skills are more likely to have better pay, better jobs, and a better chance at life. The phone isn’t going away. It may be used differently but conversations will always remain a pivotal part of how we do business.

What would you say are the main 3 benefits of having a phone conversation?

The first is the tone of voice. Really understanding what a potential customer needs and whether they are interested or not. The second would be having that conversation to help a customer uncover their problems in a better way. Finally, it would be to build relationships. Emails are all very well and good, but a phone call is how you get to know someone. It’s how you get to create that emotional connection that we need.

What would you say to a marketer who doesn’t believe in telemarketing?

I’d say, “you’re right. But only to a certain extent.'' One of the things that has happened in the last 2 years is that phone calls to customers now need to be treated as meetings. We’re all overwhelmed because of technology and the spontaneous phone call is not as appreciated as it once was.

Ideally, phone calls need to be booked ahead of time. Appointment apps can be helpful in setting up a 30-minute discovery call. By doing this, we start the conversation with the other person’s full attention.

Because they’re expecting them?

Exactly. It means they know you’re not going to waste their time. Telemarketing has somewhat become criminal in that sense. When you receive an unexpected phone call, you feel irate. You can’t blame people for that.

How will these calls be integrated into wider communications strategies?

The text/email will act as an introduction to whatever it is you’re trying to talk about, but the phone call will ultimately win.

I’ve seen a massive shift in the way my business runs. I used to teach people how to get a conversation, but now I’m teaching them how to have a conversation because the younger generation is used to talking with their thumbs via text communication to their friends. The need to keep a conversation going is crucial.

How do you see phone calls evolving in the future?

I’ve thought about that a lot. A few years ago I pondered whether my company would still have value today. But, one of the visions I get is perhaps the way we use actual phone calls. Maybe like a star trek kind of theme. The phone could be built into us, someone calls, we tap it, and then we speak.

Next week, we're speaking to co-founder of the creative SEO agency, Rise At Seven, Carrie Rose. 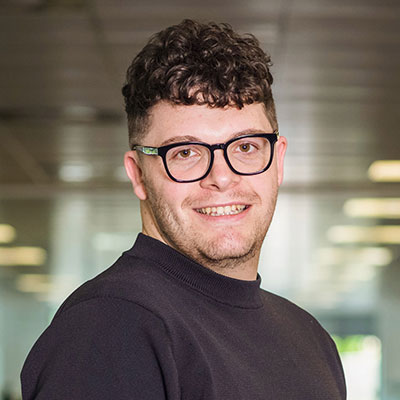 Copywriter
Alex is a digital expert specialising in creating copy that engages, entices, and excites our clients. Usually found poring over past issues of Vogue and playing paparazzi to his dogs.